Denver-based acoustic rock quartet the New Ben Franklins resound a country folk fare with banjo-riddled drapery and pedal steel encrusted melodies buffed in a modern décor of finely chiseled acoustics. The band’s new CD, [peter gabriel],named after the UK singer-songwriter Peter Gabriel, ranges from soothing campfire ballads to hootenanny/square dance tempos. The band infuses melodic nuances into the country folk fare such as the Spanish accents gilding the acoustics along “Here With Me” and the sprig of piano keys spun gingerly along the base of “My Soul,” both enriching the texture of the melodies and broadening the parameters of folk rock in ways that inspire future generations… Read more HERE

Chances are you can’t name many active bands that play original material and have been around for twenty years — much less one that has regularly evolved and experimented with its sound without always jumping on some musical bandwagon. That’s been the path of the New Ben Franklins (due this Friday, April 20, at the hi-dive) since 1992, but they’ve more fully integrated shimmery atmospherics and psychedelia into their current sound, which you’ll hear on their upcoming full-length, [peter gabriel]. It would be easy to peg the outfit as yet another Americana band from Denver, but the group is actually closer to moodier alchemists of that aesthetic, like Luna or Calexico: Rock-and-roll attitude, caustic wit and an exuberant yet melancholic spirit set this quartet apart from many of its peers.

Thanks to Tom Murphy for a nice little write up!

Today is the day! Our new CD, [peter gabriel], is available in worldwide digital distribution as well as through local stores and from New Ben Franklins directly on line… we need to build some sort of store, but until then the CD can be ordered directly from us by sending an email to newbenfranklins (at) gmail.com. We accept paypal!

“If you need another reason to get down to the Hi-Dive on Friday night, we’ve got one. Denver institution the New Ben Franklins will release its latest work, a concept album mysteriously titled “[peter gabriel],” that very same night at the very same show for the very same $6. Spurred on by singer-songwriter David DeVoe in one genre and lineup or another, the New Ben Franklins have swung from machine-driven Goth to dobro-driven country throughout their 20-year existence. “[peter gabriel]” marks that two-decade longevity by dipping into a little bit of every kind of music that has influenced DeVoe, from New Wave to new country, from Britpop to garage rock. Meanwhile, a narrative thread runs through the record that will charm fans of the Hold Steady.

While DeVoe — playing as he did on the band’s last record with Tom Oberheide (things with strings), Mark Kosta (things with skins), and Benjamin Williams (the rumbly thing with strings) — can write a song that breaks your heart, the record’s strongest moments are when the quartet rocks full throttle. In an alternate universe where rock radio has survived, “Detroit Party Jesus” would be in heavy rotation. Steal the heroin ode, “Horse,” to hear the New Ben Franklins at their most comfortable, confident and careless. You can pick up the whole album on Friday night at the Hi-Dive.” 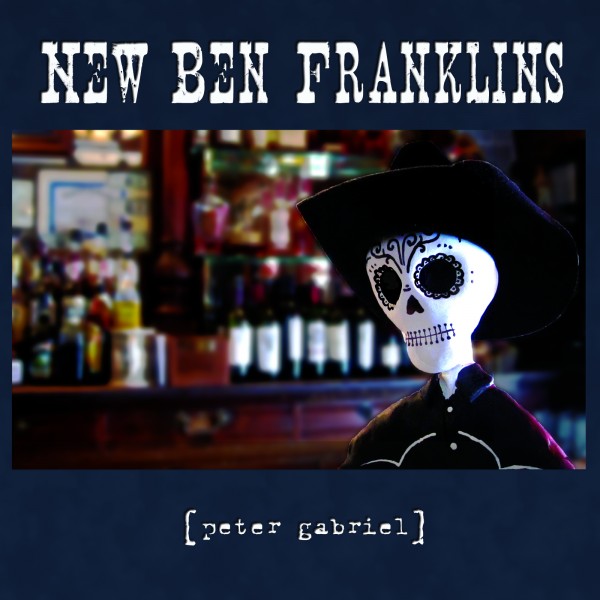 Sonic rock’n’country band NEW BEN FRANKLINS will release their new full length CD [peter gabriel] on April 17, 2012, a full twenty years from their first live appearance in the small clubs of Denver. 2012 promises to be a great year for the band; in addition to the release of [peter gabriel], the band has a song featured in the upcoming film Derby Baby, and multiple video and recording projects in the works.

[peter gabriel] is the follow-up to last year’s critically acclaimed Miserable EP and is a perfect way to hear the true breadth of the band’s sound. From the full-on honky-tonk of “Miserable” to the shoegazey walls of guitars on “Mourning,” the album promises to have a bit of aural bliss for any listener. The lyrical punch and pop of “Detroit Party Jesus” is already making waves with Colorado alternative radio and the band will shortly release a new music video for the new wavey “About You.”

“While the record really has nothing to do with Peter Gabriel himself, for more than twenty years now I’ve thought that if I ever made a really, really grand record I would title it Peter Gabriel,” said lead singer David DeVoe. “I figured that if Gabriel could title his first three records that, why couldn’t I borrow it, too?”

The fourteen-track musical adventure finds DeVoe, Tom Oberheide (pedal steel guitar, banjo), Mark Kosta (drums), and Benjamin Williams (bass), experimenting with instrumentation as varied as fiddle and dobro to horn sections and choral vocals. Written over the past decade or so and put to (digital tape) over the past six months, DeVoe stresses that even though he was using modern technology the record was made in a very traditional manner. “The album is very human,” he explains. “There are very few overdubs and edits, and absolutely no devices like autotune. The effects we used are minimal too. I really just wanted the soul of the band and the truth of the songs to show through as clearly as possible.”